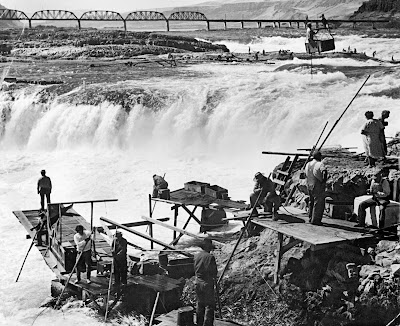 This is first of 8 pieces I have been commissioned to make for a set of horse gear,  that will narrate the many issues that tribes along the Columbia river face.   I was born and raised along the river,  so this is a subject near and dear to me.

Celilo Falls was most productive fishery in North America,  and probably the world.   Tribes gathered to fish both the spring salmon runs as well as the fall runs for tens of thousands of years.  The falls were also a giant gathering spot for tribes from as far away as Northern Canada all the way to California,  and as far west as the Great Plains.   The Dalles and Celilo Falls were the cultural and economic crossroads of the Western US.  Ancient trade goods were exchanged and cultures shared.

The falls were flooded in 1957,  when the Army Corps of Engineers built the Dalles hydroelectric dam.  It brought great changes to the Columbia basin.  The inland empire was electrified with cheap and plentiful power,  but at a great cost to the fisheries and the tribes when the backwaters drowned the falls.   It was a knife to the heart of the people who fished the falls,  and there are still people alive today who fished the falls and remember them in their glory.    This is a clip showing the power of the falls and the Native people fishing them https://www.youtube.com/watch?v=Wf4h9YPDcDg

And a video of the first feast ceremony and dances that celebrate the return of the salmon https://www.youtube.com/watch?v=UY_GO0kgYkE 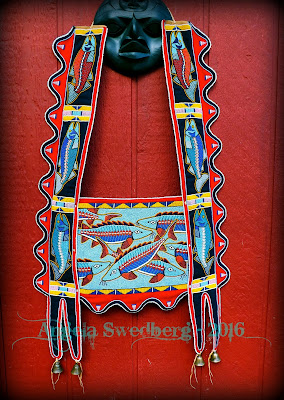 I wanted this collar to represent the dam.   The front chest piece of the collar actually represents the face of the dam.   It was discovered a few years ago,  that what was initially thought to be a giant obstruction  at the base of the dam,  was in fact 40,000 schooling sturgeon.  It is unknown why they are doing this. http://videos.oregonlive.com/oregonian/2008/05/sturgeon_ball.html 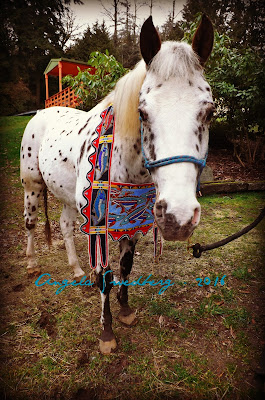 My horse "Cappy" wearing the collar. 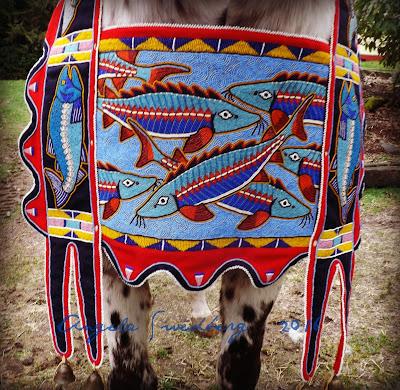 A closeup of the main panel.   This is all beaded in antique Italian seed beads ( mostly 13/0 ),  and some metallic beads on brain tanned moose hide.   I also incorporated Uranium Glass seed beads in the design.   When this is backlighted,  those beads will glow.  This represents the nuclear pollution that is leaking into the Columbia river,  from the Handford Nuclear Reservation and of which traces of the pollution can be found in the fish.     I used a contour beaded background on the chest panel to represent the swirling waters in the river. 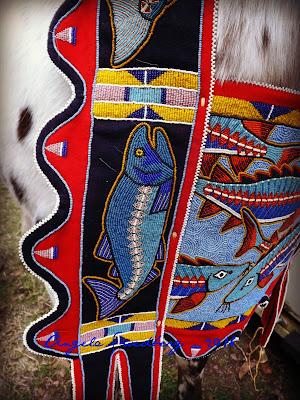 The sides of the collar ( straps ) represent the fish ladders the salmon must negotiate to spawn.   As they swim up the river, they change colors from silver bright to a very deep red color. 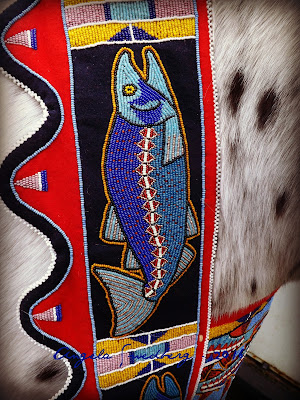 This fish is midway in his spawning journey,  and is starting to change color and get red and orange. 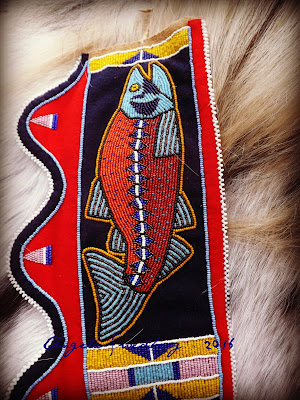 This would represent a salmon as it is in full spawning colors.   They lay their eggs and then die.  And the smolt that hatch in the spring,  with the snow runoff raising the water level and swiftness of the river,  swim all the way down the river ( hundreds of miles ) to the Pacific ocean,  where they live out their lives and grow for four years before they return to spawn. 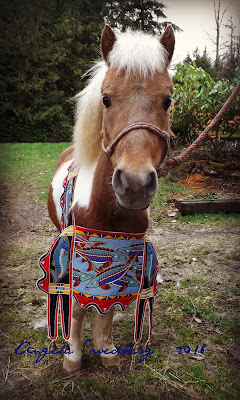 This is Cappy's buddy "Little Joe" deciding he wanted to model the collar too!  Although he needs to grow a little :-)


Posted by Angela Swedberg at 9:33 PM