The 'Making Beauty" exhibit is now up and running until 2017 at the Clark County Historical Museum  in Vancouver, Washington.  It was a real honor to co- curate this exhibit with Steve Grafe Phd,  who is also curator at the Maryhill Museum of art.   This was a entirely new manifestation for me working in this capacity, and I could not have done it without Steve's expert help.

The photos are some panoramas of the exhibit ( Kindly provided by Steve Grafe ).   Some never before seen and displayed historical work,  as well as contemporary beadwork from such notable artists as Jackie Larson Bread ( Blackfeet ),  Charlene Holy Bear ( Lakota ),  Robert Taylor ( Nez Perce' ),  Molly Murphy Adams ( Lakota ),  Miles Miller ( Yakima ),  and yours truly.

My "War on Terrorism" war trophy necklace ( Hot offhand sculpted glass fingers,  antique seed beads, hide,  arrow heads ) which addresses the subject of "who are the terrorists",  especially a century after the conflicts are over.   120 years ago,  Natives here were subject to the War on Terrorism.  Time has changed some of those perceptions of historical events. 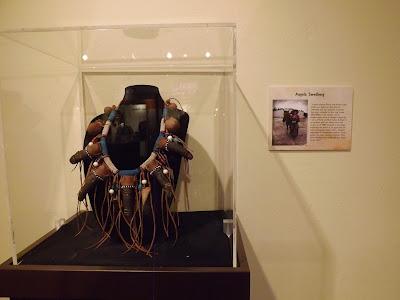 And of course,  my "Gucci" moccasins.   Made from Gucci leather and 24K. gold beads and cones. 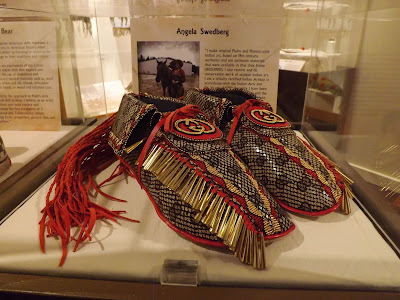 Please come by to see the exhibit if you are in the area.

Posted by Angela Swedberg at 1:50 PM