Panel belts, beaded on hard harness leather were a very common form of clothing among the Plateau peoples, and also across the Northern Plains.  They are worn by both men and woman.  The usual difference in being that the mens tended to be narrow, and the women's belts wide.  Today they are still worn, although most now are fairly wide. 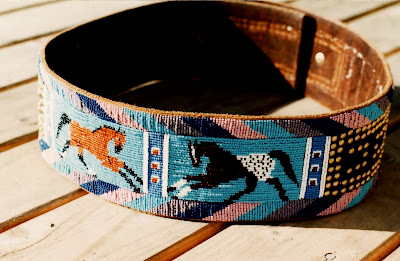 These are not easy to make, as every hole thru the leather has to be pre-punched by a awl, before passing the thin and fragile beading needle thru the leather.  One of the tricks used by the old time beadworker's was to take the harness leather to the saddle makers shop, who would figure out the hole spacing determined by the size of the beads the artist was using, and run the belt thru his sewing machine using a unthreaded needle.  This can only be done using the old time harness makers sewing machines. 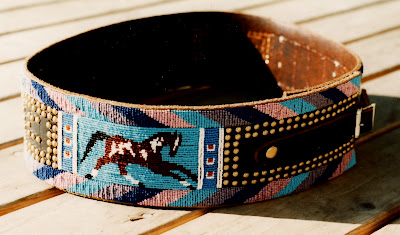 This belt I made using both modern 13/0 cut beads as well as antique cuts beads.  On the Plateau these belts were commonly made using cut beads in some very small sizes (16/0).   Also, when I made this belt originally, I put horses on the panels that I either had owned (the Paint horse and blanketed Appaloosa) or always wanted.  I have since gotten a Buckskin, which ironically is marked just like this one including two hind white socks.  Now I just need a Paint horse like the brown one :-) 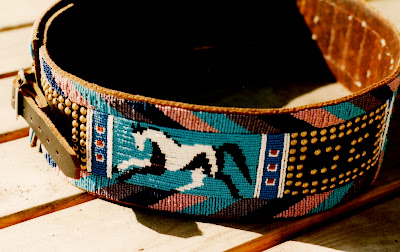 It is fairly unusual to have pictorial figures on the panels of the belts, as this part is done with very long stings of beads and all the design work has to be figured prior to this.  Then the belts are not being worn and lay flat, these beads hang loose and very sloppy looking.   The other difference on this belt from most is that all the panels are different while on most the panels are all matching. 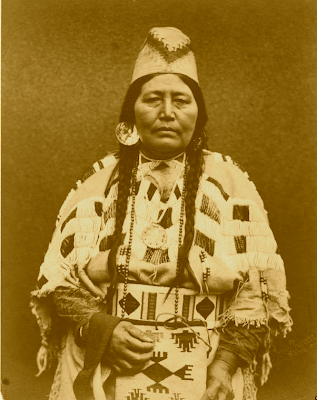 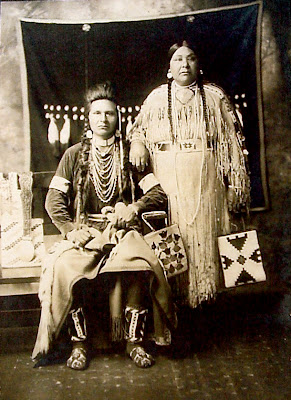 In these two photos you can see the belts as they would have been worn.  The man in the last photo is the famous Nez Perce' Rodeo rider Jackson Sundown and his wife Cecelia.   Not only do I admire him for his riding skills and traditional values, but feel a connection to both him and his wife in a special way.  I have had the privilege as a art restorer to have worked on several items he owned and wore and that his wife Cecelia had made.  That certainly puts the history of these beautiful people in a very personal perspective for me.

Angela
Posted by Angela Swedberg at 5:29 AM