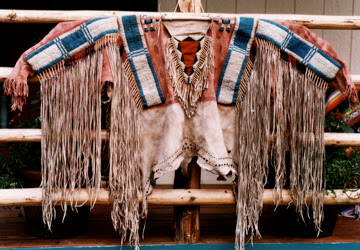 I had totally forgotten about this shirt, as well as the publications it had been in until a dear friend in Italy asked me about published works.  And there are quite a few, so I thought I would start with this shirt.

This shirt was a commission from some  good friends of mine, who are collectors of major Plateau material.  They very much appreciate both antique material and also contemporary works for the artistry and expression of a culture.  They have quite a few of my major pieces.   This shirt is made just like ones from the 1860's, using brain tanned Mt. Sheep hides for the body, and this shirt
took 4 brain tanned antelope hides to do the fringe, which is wrapped with wolf moss dyed quills and correctly dyed wool yarn.  It is sinew sewn using vintage pony beads and cloth and painted with a natural mineral pigment paint I happened to dig myself in Eastern Washington. 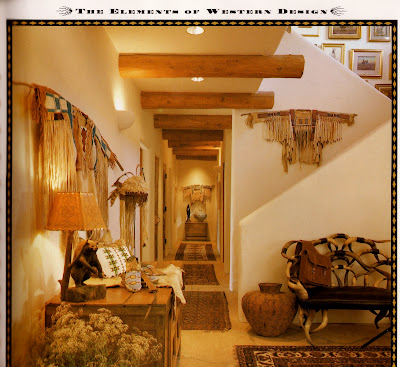 This photo is from the book "Western Design" and it has also been published in "Cabin Fever" (Both books are about Western High Style Interior Design, and was also published in Cowboys and Indians magazine. 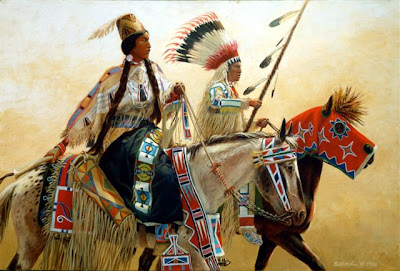 What was really a amazing process in researching and making this shirt was that two different people came up with essentially the same idea.   I had done my initial research for this shirt looking thru the slide collection of Bill Holm, a Indian art scholar I have nothing but the highest praise and respect for.   So once it was done, I thought I would bring it to his home to show him.  It is a original (meaning I did not copy a existing shirt) but certainly was based on historic material.   When Bill saw the shirt, he got excited and wanted to know where I got my idea for it.  I explained my process.  He disappeared to the back of his studio, and then reappeared with this painting "The Parade".  The warrior riding the bay horse was wearing the almost exact same shirt, also a creation of Bill Holm's imagination.  I was speechless to say the least.  And being such a generous man, he gave me a A/P print of the painting.  It is one of my treasures. 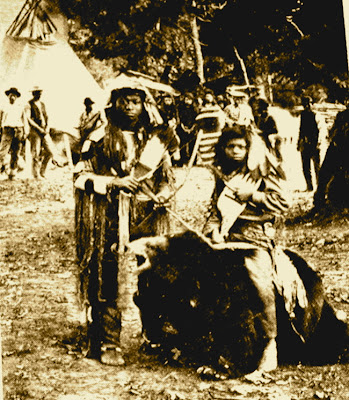 The last photos was taken around the 1860's period in Eastern Oregon showing a young man to the left wearing a similar type of blocky pony beaded shirt with the long tripled fringe.  In its day, to be able to use so much hide for fringe was certainly a status symbol.  And I think for today this also holds true as it is a lot of work to procure and tan these hides, or to purchase them from someone who does.  Just to cut them up into fringe.

Posted by Angela Swedberg at 8:33 PM