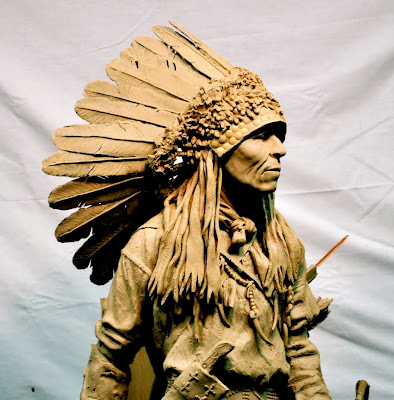 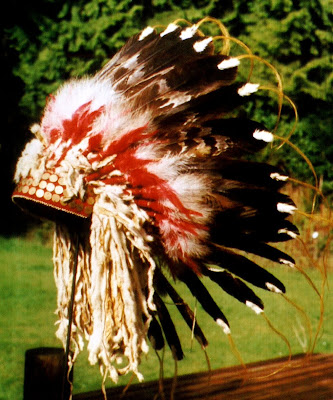 The world of the internet can be a interesting one. Having this Blog has actually connected me to people I would probably never have known about and had contact with by conventional means. Sculptor Dave Lemon is one example. I am not sure how I found his blog site, but was very moved by his amazing bronze sculptures and also his sharing of the process and openness to educate those who find his site. When Dave was working on his current project "The Protector" we talked back and forth a bit about Blackfeet Bonnets. There are many types, some of which are very sacred to the Blackfeet and require rights to make and wear them. These types should not be messed with or worn with by reproduction artists or hobbyists with out securing proper rites to them, as they are still very much in use by the Blackfeet peoples. Others, like this bonnet I reconstructed for a Blackfoot friend of mine from a old bonnet that had been in his family are more secular in nature. The photo of the three Pikuni men taken in 1916 show these two types of bonnets. Wolf Plume is wearing the type of bonnet I rebuilt, while Curly Bear and Bird Rattler are wearing what are known as "Straight Up" bonnets. These are only worn and made by those to whom rights are secured and transfered. Many of the first type of bonnet were given away in "Making Chiefs" ceremony's by the Blackfeet, especially to non-native folks of prestige who came to Glacier National Park in the first half of the 1900's (And before the golden eagle was declared a endangered species in the 1960's). Before that, you could actually mail order feathers and many hobbyist made bonnets are still floating around that are made with pre-ban feathers. 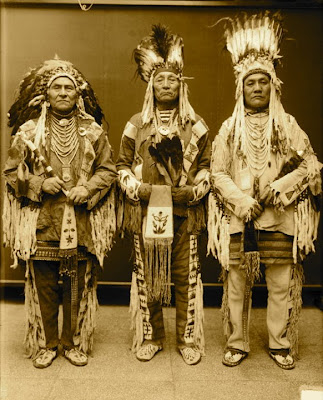 So, in getting back to this bonnet. I sent a photo of it to Dave, who in turn is using it on his current bronze. I love when this back and forth of artwork happens.
Check out Daves Blog and work. You'll be impressed. http://adayinthelifeofalemon.blogspot.com/2010/06/protector-headdress-finished-today.html
Angela
Posted by Angela Swedberg at 8:21 AM