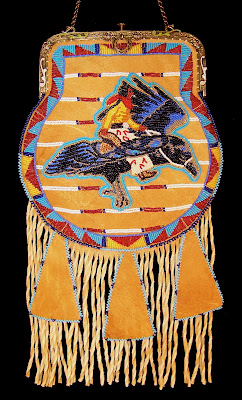 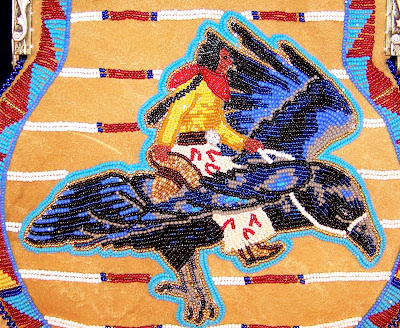 This bag was made for the upcoming December show at the Stonington Gallery in Seattle. The show is "Eagle/Raven". I decided to bead my all time favorite Indian Cowboy Jackson Sundown. The following is a brief biography:

The horse became a very important part of the Nez Perce people. Not only for hunting in buffalo country, but the horse was a warrior. Nez Perce learned to breed and work with horses. Waaya-Tonah-Toesits-Kahn (Jackson Sundown) from an early age worked and cared for horses. Waaya-Tonah-Toesits-Kahn was a famous all-around cowboy, horseman, and excellent rider and breeder of horses.
The Nez Perce War of 1877 began and Waaya-Tonah-Toesits-Kahn was 14 years old. Waaya-Tonah-Toesits-Kahn and Sam Tilden (Suhm-Keen) both were assigned to attend to the horses in the evening and herd the horses while the tribe decamped. After the Nez Perce war ended Waaya-Tonah-Toesits-Kahn retreated to Canada with a small band of cold, hungry and injured Nez Perce. It is believed that Waaya-Tonah-Toesits-Kahn stayed with the Sioux (Sitting Bull's camp in Canada) about two years, then crossed the border into Washington. He then went into Montana, married and had two daughters.
Waaya-Tonah-Toesits-Kahn became known as Jackson Sundown and developed a well know reputation as a skilled horseman.
In 1910, Jackson Sundown moved back to Idaho. And in 1912 he married Cecelia Wapshela, and they lived on her ranch located at Jacques Spur, six miles east of Lapwai.
Sundown became a well known all-round rodeo rider. Jackson Sundown was going to rodeos all over the northwest. In 1912 it is recorded that Jackson Sundown (at the age of 49) entered rodeo events in Canada and Idaho (Culdesac, Orofino, Kamiah and Grangeville). Sundown became a favorite at these rodeos because he was tall, lean and handsome, he wore his hair in braids tied under his chin, and he always wore bright colored shirts.
In 1914, Sundown was having much success as an all-around rodeo rider. Other contestants pulled out of rodeos because Sundown was riding and they knew he would win. As a result the rodeo managers decided to hire Sundown to exhibition ride for $50.00 a day to entertain the crowds.
In 1915, Sundown (at age 52) went to Pendleton Oregon and placed third. Sundown decided to retire from rodeo after the Pendleton Roundup. In 1916 a sculptor, Alexander Phimister Proctor (who was sculpting Sundown at the time), persuaded Sundown to enter the 1916 Roundup in Pendleton, Oregon and paid his entrance fee. Sundown made it to the saddle bronc semi-final round and then rode "Casey Jones" to move into the finals with two other cowboys (Rufus Rollen and Bob Hall). Rollen and Hall both had excellent rides. As Sundown eased onto Angel's back for his final ride, the blindfold was removed from Angel. Angel tried to whirl and leap to throw Sundown off. All Sundown's years as a child in the Wallowa's riding, and his career in Montana as a horseman, and his rodeo experience showed that day. It is said that Sundown became one with the horse. As Angel tried one last attempt at throwing Sundown off, Sundown fanned his hat at the horse. And then the signal of the end of the ride. Jackson Sundown, Waaya-Tonah-Toesits-Kahn, was the 1916 World Champion Bronc Rider.
Sundown made his last public appearance in 1917 for Governor Moses Alexander.
In 1923, Jackson Sundown died of pneumonia, he was buried at Slickpoo Mission Cemetery near Jacques Spur. Later a stone monument was placed there to remember the Nez Perce warrior and horseman Waaya-Tonah-Toesits-Kahn.

Jackson Sundown was a man to be admired and honored. And he could ride anything, even Raven if he wanted to! Posted by Angela Swedberg at 2:59 PM